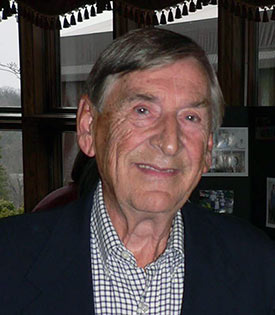 If ever there were a local boy makes good story for a Pittsburgh native, then Raymond J. Niesen embodies such a tale. After graduating from Allegheny High School on the Pittsburgh North Side in 1944, Raymond enlisted in the Army—training first in the Army Air Corps as a pilot, and then as a tail gunner on a B-29. After the war, Niesen used the G.I. Bill to enroll at Bradley University, eventually transferring to the University of Pittsburgh where he earned a B.S. in 1951.

He worked for US Steel (Edgar Thomson Works) in the Metallurgy Department for nine years before taking a job in the Chicago-based S. Obermayer Refractories Co.—a company later acquired by Combustion Engineering. Hard work and dedication paid dividends, as he rose to become Vice President/General Manager of the Refractory Products Group, C E Cast Division. In 1973, Raymond founded United Refractories Co, (URC) originally to import Swedish silica into the U.S. for coreless induction furnaces melting iron. When the deal with the Swedish went south, Niesen took it as an opportunity to begin formulating his own refractory products.

That single opportunity formed the bedrock of the company URC is today. In 1978, Raymond opened his first manufacturing plant in Detroit, Michigan, followed four years later by a new plant in Cincinnati, Ohio. In 1983, Niesen consolidated both plants to form UNI-REF, Inc., our manufacturing facility in Sharonville, Ohio. Corporate headquarters remain, not surprisingly, in Pittsburgh, Pennsylvania.

Through the years, Raymond’s dedication to strategic and conservative growth, plus his reputation as a man who treated suppliers, employees and customers with unparalleled respect, has made United Refractories Co. the reflection of a brave and intelligent local man who faced both challenges and opportunities with equal zeal and determination.